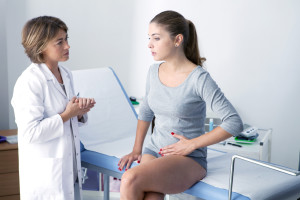 Cancer is a scary word. No one likes to hear about it because it usually leads to bad news, however, have you heard of the idiom an ounce of prevention is worth a pound of cure? Well, it is extremely important for women to know about these five main types of gynecologic cancers because treatment works best with early detection. Read on to learn about the different types of gynecologic cancers because all women are at risk and it only increases with age.

According to the Centers for Disease Control and Prevention, cervical cancer occurs most often in women over the age of 30 and each year, approximately 12,000 women in the US develop it and roughly, 4,000 women die from it. The cancer forms in the cervix and early symptoms may be hard to self-identify, as the cancer doesn’t begin to show signs until it’s more advanced. Those symptoms may include discharge or bleeding from the vagina that isn’t usual, such as bleeding after intercourse. The main cause of cervical cancer is the human papillomavirus (HPV) and it is commonly transmitted from one person to another during intercourse.

This type of gynecological cancer usually starts in the ovaries or fallopian tubes. Ovarian cancer causes more deaths than the other types of cancers found in the female reproductive system. However, when ovarian cancer is detected in the early stages, treatment tends to be much more successful. Hysterectomy treatments will include the removal of the ovaries and fallopian tubes. The CDC cites that symptoms, which tend to be vague, may include abnormal bleeding or discharge from the vagina, pain in the pelvis or abdomen area, bloating and changes in your bathroom habits.

When cancer starts in the uterus, it is referred to as uterine cancer and the most common type is cancer of the lining of the uterus, called endometrial cancer. As mentioned above, early detection is the best-case scenario for successful treatment. With endometrial cancer signs and symptoms generally present very early in the course of the cancer. Most women may experience abnormal bleeding such as bleeding after menopause or bleeding between periods. It can also cause pain and pressure in the pelvic area and you should see a gynecologist immediately for a proper examination if any of these symptoms or signs appears.

Two other forms of gynecological include vaginal and vulvar cancers but the CDC estimates that they only account for 6% to 7% of all gynecological cancers in the US. While they are statistically more rare, it is still important to understand the signs and symptoms. Vaginal cancer may show signs of abnormal bleeding or discharge, a change in bathroom habits like having blood in the urine or stool, an increased frequency in bathroom trips and pain in the pelvis. With vulvar cancer, there can be burning, itching or bleeding on the vulva that doesn’t go away, or there may be color changes of the skin of the vulva. The vulva may also have bumps, sores or ulcers that don’t go away.

Every woman should be aware of these types of gynecological cancers as they can become very serious if not treated quickly. Depending on the type of cancer, it may require one of the different types of hysterectomy treatments plus other forms of treatments to address the concern. With that said, all women should regularly visit a gynecologist because it is one of the best preventative measures a woman could take.

The Gyn doctors to trust. know.

As always, we are ready to take care of you.